Discovered in Palestine in 1947 by three Bedouin cousins, the Dead Sea Scrolls had been stored in caves near the site of a monastery of an exiled sect of Essenes at Qumran, on the northeast coast of the Dead Sea, since at least 68, when Roman forces sacked and burned it. Beginning in the middle of the 2nd century BCE, Qumran had been occupied by a group of priests who left Jerusalem for the desert led by someone referred to as the Teacher of Righteousness, apparently exiled from the Temple priesthood by one known only as the Wicked Priest. 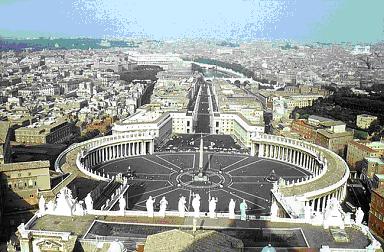 S. Pietro. View from the cupola towards the square.

The scrolls themselves included, among other things, the teachings of the Qumran community, and copies of several books of the Hebrew Bible, notably a leather scroll of Isaiah at least a thousand years older than the oldest Hebrew manuscript of that book. Their main value, however, is the light they may shed on the origins of Jesus’s beliefs and his possible connection with the Essenes. Because access to the scrolls themselves, not all of which have been translated, was restricted until recently to a select group of scholars, they have been surrounded by controversy. Scholars still debate the exact identity of the authors of the scrolls: one authority feels they were not Essenes but Sadducees, another claims they are related to the teachings of James, the brother of Jesus, who led the Jerusalem Jesus Movement. No fully satisfactory answers have yet emerged.

Next ~ Spreading the Good News »