Plato was the most famous and influential of all the Greek philosophers. Many scholars believe that the modern sciences of logic and psychology are based on the analyses that appear in Plato’s dialogues. Although the principal speaker in those dialogues is Socrates, Plato’s teacher and a highly influential philosopher and gadfly of Athenian society, a good deal of the teachings must have been generated by Plato himself. 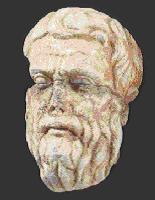 Plato’s most famous dialogue, The Republic, influenced the writings of Milton, Locke, Rousseau, and Goethe. His theology influenced the early Fathers of the Christian Church. Plato is also considered the father of idealism in philosophy, politics, and literature, and he anticipated modern conceptions of unified knowledge, the supreme importance of law, and the equality of the sexes.

For Plato, human beings live in a world of both visible (sensible or material) and intelligible things (anything arising from reason alone, including abstract definitions). While the visible world contains material objects, the intelligible world holds the eternal “Forms” of things–the first known statement of the concept that Carl Jung made famous as archetypes. The visible world is the imperfect and changing manifestation in the world of unchanging archetypes that are found in the collective unconscious of humanity. For example, the Form of a ship is abstract and applies to all seagoing vessels; as different as the individual manifestations of ships might be, the Form never changes. Plato imagines the visible world and the intelligible world existing on a line that can be divided in the middle. Each half of the line relates to a different kind of knowledge. We can have opinions of the visible world, because material objects are fleeting and changeable; but we have absolute knowledge of the intelligible world by virtue of its unchanging Forms. Each of these divisions can be further divided in two. The visible or changing world is made up both of “illusion” (shadows, reflections, individual books or paintings) and “belief” (the knowledge of changeable things, such as individual ships). “Belief” is true most of the time, but sometimes can be wrong, because the visible world changes. The upper region can be divided into “reason” (the knowledge of things such as mathematics) and “intelligence” (knowledge of the most abstract categories, including an understanding of the ultimate good).

Plato’s most popular dialogues include The Apology, The Crito, The Phaedo, The Phaedrus, The Symposium, and The Republic.