Invasion of the Nomad Hordes

According to this scenario, sometime between 6,000 and 8,000 years ago, the balance between male and female began to shift. Millennia of agrarian tranquility were shattered by a period of violent upheaval and anarchy. Marauders riding on horseback or driving horse-drawn chariots thundered across Europe and Asia. Pastoral nomads, animal herders with no fixed abode, had been growing for centuries along the fringes of the stable agricultural societies of the Middle East, the Indus Valley, and Old Europe (a designation covering most of modern Italy, Greece, Crete, western Turkey and southeastern Europe). Descended from the Paleolithic hunters of the steppes, they had become warriors; now they began to disrupt the long-established civilization that worshiped the Mother Goddess. 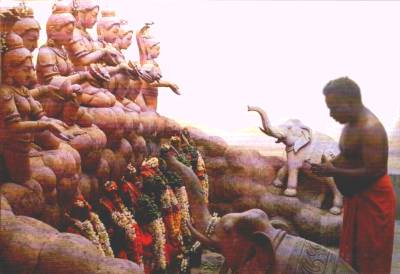 Known today as Indo-Europeans or Aryans, they were not Nordic in appearance and were neither Indian nor European, originating somewhere in Asia and northeastern Europe. Archaeologist Marija Gimbutas of UCLA, whose ground-breaking work has been responsible for many of the new insights concerning this transition, believes that various tribes of nomads began invading in three major onslaughts dated at approximately 4300, 3400, and 3000 BCE. In the Middle East, the Semitic peoples, who developed in the large, arid desert west of Mesopotamia, stretching south from Syria into the Arabian Peninsula, swept over the more fertile lands of Sumeria and what became known as Canaan and Palestine.

These nomadic invaders had male hierarchies of priests and warriors (and sometimes warrior-priests), worshiping not the Goddess but male gods of war and sky and mountains. The Hebrews, who may have gotten their name from one of the Hapiru, or nomadic tribes from the south of Canaan, fit this mold; the accounts of their invasion, conquest, and subjugation of the Canaanites in the early books of the Bible are replete with the massive destruction and slaughter that invariably accompanied the appearance of the nomadic invaders. What the Hebrews and other Semites had in common with the Aryans who invaded northern India, Greece, and Old Europe was something the scholar Riane Eisler terms a “dominator model of social organization,” as opposed to the “partnership model” of the Goddess culture.

For the most part, the nomads seem to have come from arid, unproductive lands — the steppes of Central Asia or the deserts of Arabia — and to have worshipped warlike sky gods, especially gods of the storm, wind, lightning, sun, and fire. The harshness of the conditions under which they lived would have dictated the reliance on superior might that shaped their culture. Living by dominance over other tribes, it was a logical step to begin to pillage stable agrarian cultures settled in the more fertile lands of Old Europe or Canaan (“a land flowing with milk and honey”), who could offer relatively little resistance. The contrast between these violent nomadic herders and the peaceful farmers over whom they rode roughshod can be seen even in the conflicts between cattlemen and sodbusters in the American West that have formed the basis for endless Hollywood westerns. There may even have been a dietary component to the equation. The Neolithic peoples probably relied for only a small portion of their food on the hunting or slaughter of animals; their most plentiful and reliable sources of food were the grains and other edible plants they farmed. The nomads depended to a much larger extent on the slaughter of herd animals and a meat-centered diet that may have stoked their aggressiveness.

Aided by the use of copper, bronze, and iron for making weapons, and the domestication of the horse into an implement of battle, the invaders initiated a new culture based not on production but on conquest. The seeds not only of warfare but also of slavery, subjugation, and plundering, of social stratification with the warrior strongman at the top, the amassing and concentration of wealth, large-scale human and animal sacrifices, and the custom of killing the wives, concubines, and slaves of powerful men to be buried with them can all be traced to this shift in civilizations. At the same time there was a precipitous decline in the level of art and culture — what we might almost call today “quality of life.” Warriors had little use for art, decoration, and the mystical rites of the Mother Goddess; even the use of vivid colors virtually disappeared.

The connection between the changeover from Goddess to male-dominated culture and the rise of written language may not be altogether coincidental. In his book The Alphabet Versus the Goddess, Leonard Shlain proposes that the invention of writing rewired the human brain, reinforcing the linear, abstract, predominantly masculine left hemisphere at the expense of the holistic, iconic feminine right side. This shift upset the balance between men and women and led to an attack on goddesses, an abhorrence of pictorial and “graven” images, and the decline of women’s political status.