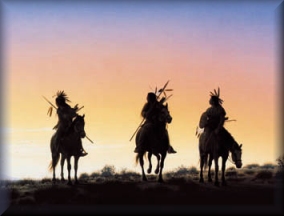 As American Indians emerged during the past century from the controlling influence of Christian missionaries on the reservations, they have fought to reclaim their religious heritage and to guard it from distortion by the dominant white culture of North America. Some Native Americans have expressed the feeling that their religion is not appropriate for use by outsiders, and that non-Indians have no business participating in Indian rituals such as the sweat lodge and vision quest. Other Indians have taken a different stance, saying that there is no reason why outsiders should not participate in and learn from Native American rituals and beliefs in much the same way that they have benefited from the practices of Zen, Sufism, Yoga, and other non-European belief systems. As these Indian teachers and spokespeople argue, the world has never been more deeply in need of what their tradition has to offer. And it is an ancient culture of enormous value, reaching back to the very earliest forms of spiritual life that were practiced on the earth.

Archaeologists propose that tens of thousands of years ago a somewhat uniform culture stretched around the northernmost regions of the globe from Greenland and Scandinavia to northern Asia and Siberia. The peoples of this circumpolar culture shared a common history and many religious beliefs and practices including animism, shamanism, and ceremonies centered around hunting and animals. The culture reached down into China, where it influenced the development of Taoism, and Tibet, whose shamanistic Bon culture left its stamp on Tibetan Buddhism. Beginning as long as 60,000 years ago, the peoples of northern Asia migrated across what is now the Bering Sea to Alaska and Canada, and then down through the Great Plains of North America to Central and South America.

The culture of these migrants, the ancestors of the North American Indians, incorporated elements of religion based on both nomadic hunting (mountain and sky gods) and agriculture (earth goddesses, shrines, and temples). As in many Goddess religions, the Native American conception divides the universe into heaven, earth, and underworld. Distinctions among spirits, divinities, humans, and animals are often blurred. Animals, places, even stones and trees can possess spirits that interact with humans in a kind of cosmic harmony, similar to the ancient concept of kami in the Shinto tradition of Japan. This belief, known as animism, is common to many preliterate religions which hold that personal, intelligent spirits inhabit almost all natural objects, from stones, plants, and rivers to insects, birds, animals, trees, and mountains. Indians regard some, but not all, places as sacred; certain locations and animals are singled out as manifestations of the supernatural, including those seen in dreams or visions.

The native religions of North America, like those of other continents, by and large rely on oral rather than written transmission, which is why they are sometimes called preliterate, or primal, acknowledging their ancient status (the term “primitive” is no longer applied, because of its pejorative connotation). In the truest sense, they make up a communal religion; many tribes and members contributing to a tradition which is basically the same for most Indians, with a wide range of regional and tribal variations.

Indigenous peoples look on the cosmos as a living womb that nurtures their lives, and so they have less need to destroy or reshape it as more technologically developed cultures do (although they sometimes abuse the land and livestock as developed cultures do). Their goal could be described as achieving harmony in the personal, social, and cosmic realms, rather than gaining personal salvation or liberation as historical religions aim to do.

Next ~ The Roots of Democracy »

The Roots of Democracy
Shamanism
The Great Spirit
Rituals and Customs