The most popular school of Buddhism in China and Japan today is commonly known as Pure Land. Based in part on the Sukhavati-vyuha, or Sutra of the Land of Bliss, which describes paradise in exquisite detail, was essentially founded in 402 by a Chinese monk named Hui-yuan (336-416), and carried to Japan in the 9th-10th centuries. More exclusively devotional than most previous forms of Buddhism, Pure Land emphasizes deep faith in the power and compassion of Amitabha (Skt. “Infinite Light”), a Mahayana figure unknown in earlier Buddhism. He is imagined as 90 million miles tall, overseeing a vast land flooded by his incomparable radiance, located countless universes to the West. Amitabha achieved buddhahood conditioned on his vow to cause everyone who places trust and devotion in him to be reborn in his paradise, where there will be no painful or inferior modes of existence. There will also be no women, since all women are reborn there as men; hence, the pleasures of love will be absent. The doctrine of Pure Land is somewhat similar to the Protestant notion of justification by faith (as opposed to works), and Hui-yuan’s aim was much the same as that of the Protestant Reformers: to simplify devotion in an age of religious decadence and complexity. Pure Land devotion consists mainly in what the Japanese call nembutsu, reciting the name of Amida (the Japanese form of Amitabha) and visualizing his paradisaical land, which is enough to guarantee rebirth there.” 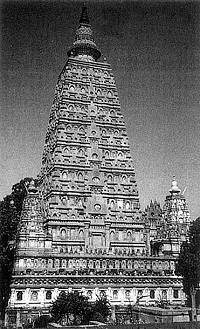 The Indian cosmology amid which Buddhism grew already included many images of pleasant heavenly resting places between reincarnations on the endless cycle of rebirths. As Mahayana Buddhism developed during the 2nd and 1st centuries B.C.E., related visions of buddha-fields or buddha-paradises were conceived, each ruled over by a particular buddha believed to provide individuals with the fulfillment of their needs. These include the Tushita Heaven, where buddhas dwell who have only one more rebirth to go through — the most prominent being Maitreya, the last of the five earthly buddhas, expected to appear in about 30,000 years. But Tushita was later supplanted in China by Sukhavati (Skt. “Blissful”), also known as the Western Paradise, a kind of halfway house on the Road to Nirvana. The faithful who are fortunate enough to be reborn in this realm of fragrant flowers and gem-bearing trees may each sit on an individual jewel lotus and study the Dharma, or teachings of Buddhism, with Amitabha himself, free from all sadness, misfortune, or pain, progressing toward their inevitable buddhahood and nirvana.

Other forms of Pure Land practice add devotion to Kuan-yin or Avalokiteshvara, and Ta-shih Chih or Mahasthama, bodhisattvas representing the compassion and wisdom, respectively, of Amitabha; statues of all three show up in Chinese Buddhist temples. Pure Land Buddhism was part of the teachings brought over to Japan in the 9th century by Saicho and his disciple Ennin (Jikaku Daishi, 793-864), but it didn’t take hold of the popular imagination until the 12th century, when its simplicity and undemanding practice made it a natural for the masses. The first Japanese sect, Yuzu Nembutsu, was supplanted by the Jodo (“Pure Land”) sect founded in 1175 by Honen (1133-1212), the first to institutionalize the practice of nembutsu as an independent school of Buddhism. Hoping to convey an “easy path” as an alternative to the time-consuming practices of asceticism, meditation, and sutra study that the common people had no time for, Honen required only recitation of the phrase Namu Amida Butsu, or “Veneration to Amida Buddha.” Perhaps for the first time in Buddhism, a school placed more significance on the intervention of an outside force than on personal effort or the effects of karma, something that would appear to go against the Buddha’s admonition to “be your own refuge.” But Honen believed that traditional Buddhist disciplines were no longer effective in the decadent era in which he lived. In such a time, he held, one’s own efforts — whether good works or religious exercises — are of no avail. One must rely on a higher power, in this case, Amitabha Buddha. However, Honen admonished his followers to observe the monastic regulations and to respect the sutras.

Honen was followed by a disciple named Shinran (1173-1262), whose Jodo Shin (“True Pure Land”) eschews monasticism, although its leadership is hereditary. He believed it unnecessary to call on Amida constantly; even once was enough to insure rebirth in the Western Paradise. Jodo Shin is the leading school of Buddhism in Japan today, with no religious rules whatever that might distinguish its members from ordinary folk.