The Life of the Buddha

According to tradition, the historical personage known as Siddhartha Gautama was born to a royal family in Northern India, in the foothills of what is now Nepal around 563 B.C.E. (The dates of his birth and death are reckoned as 563-483 BC by Western scholars, 624-544 according to Sri Lankan tradition). Siddhartha led a sheltered existence in the court of his father Suddhodana, the king of the Shakya clan. According to the legends, Siddhartha bore the traditional 32 marks of an Enlightened One, and soon after his birth a soothsayer predicted that he would become, in the words of one commentator, “either a king whose chariot wheels would roll everywhere, or a preeminent sage who would set rolling the wheel of the good law throughout the world.” Suddhodana, a member of the warrior-ruler caste, preferred the royal vocation, and shielded his son from any encounter with aging, sickness, death, or the ascetical Hindu monks of the time. He provided Siddhartha with three palaces and ten thousand dancing girls to keep his mind firmly rooted in the “real” world. But, as so often happens when manipulative fathers groom their sons to take over the family business, Siddhartha rebelled.

Legend states that at 16 he married a beautiful young princess named Yasodhara, by whom he fathered a son, Rahula. Esoteric or Tantric accounts insist that the dancing girls were actually well-trained sexual partners who sometimes combined their talents to perform the so-called yogini chakra with Gautama, during which he made love simultaneously with as many as nine women. 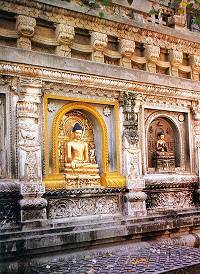 But by the age of 29, Gautama had come across aging, sick, and dying men outside the palace. These encounters with mortality blew down his father’s carefully constructed house of cards, horrifying the young Siddhartha with the realization he later verbalized as “every living thing must decay.” How could he enjoy his life of pleasure once he knew it all must end eventually? Hedonism having lost its appeal, Gautama was struck by the self-possessed and tranquil figure of a passing ascetic, who seemed to have found an answer to the dilemma of human pain and mortality, and he determined to become a monk himself. Leaving behind his wife and child, Siddhartha renounced the riches and pleasures of the palace and went in search of deliverance from suffering.

For a while the future Buddha practiced two yoga meditation tradtions until he realized that they would not permanently release him from suffering. Then he practiced the asceticism of the yogis of that time and place, nearly starving himself to death in the process. Finally he came to the conclusion that asceticism in and of itself was not the answer. The logical conclusion of denying the physical body is death, but the principles of reincarnation dictated that he would return in another body and be forced to repeat the process ad infinitum. During his life-threatening fast, he realized that enlightenment could be reached only through the vessel of the body, and there was a limit to how much deprivation his body could safely endure. And so Gautama abandoned the extreme asceticism he had been practicing in favor of a Middle Way between devotion to pleasures of the senses and complete denial of them.

Accepting a bowl of rice and milk that was offered him, he ate and his strength began to return. He then went and sat at evening under a nearby fig tree (now known as the Bodhi, or Bo, tree, the “Tree of Wisdom”), refusing to move until he had discovered the secret of release from suffering. In the early morning hours he realized the nature and cause of suffering and the way of release from these causes that constituted his enlightenment. He came to understand that one could be freed from suffering in this life by moderating its real causes: passionate craving, hatred, and ignorance. After sitting in meditation, the Buddha looked up at the morning star and said, “How wonderful. How wonderful. All things are enlightened exactly as they are!” He continued meditating for another 49 days.

All agree that he experienced nirvana, a Sanskrit word meaning “blown out,” like a candle, representing the extinguishing of all desire. He chose to live and teach, however, wandering the land for the next 45 years, begging food and shelter and teaching in the vernacular to men and women of all castes.

After 45 years of preaching, at the age of 80, the Buddha died. His last words are said to be, “All composite things are decaying. Work out your salvation with diligence.” (“Composite” refers to the belief that all objects and people are composed of changing and changeable factors, both psychological and physical.)

The Buddha left no writings. All Buddhist scriptures are based on accounts of his life and teachings passed down orally by his disciples from generation to generation. Traditionally, the accounts were committed to writing (in Sanskrit and in Pali, a Sanskrit-derived Indian dialect that may have been close to that spoken by the Buddha) within 100 years of the Buddha’s death, but modern scholarship places the dates closer to the 2nd or 1st century B.C.E. The written records of his sermons and dialogues are known as sutras, similar in format to Hindu sutras, but closer in spirit to the Christian gospels.