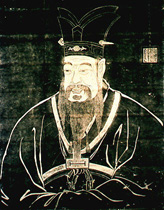 Confucius is a Latinization of K’ung Fu-tzu (“Kung the Master”), who lived from 551 to 479 BCE. Despite starting early in a life of study, Confucius failed to become a public servant as he dreamed. Instead, he taught his socially radical principles to a small but loyal band of followers outside the mainstream of Chinese political life. Although his teachings were not especially popular in his own day, they exerted tremendous influence on the moral and philosophical thought of all China in the centuries after his death.

Confucius was concerned about the constant chaotic warfare among the clans of his day, and he searched the old rituals for ethical human guidelines and moral principles to help see people through that turbulent era. In the process, he founded the first recorded Chinese wisdom tradition, predating recorded Taoism by more than a century. Although many Westerners do not think of Confucianism as a viable spiritual path along the lines of Taoism, yet most Chinese have traditionally practiced Confucian principles alongside both Taoism and Confucianism for many centuries. (The Communist and Cultural Revolutions suppressed and distorted these teachings in the 20th century, yet many observers claim that the principles are still adhered to by vast numbers of Chinese.) Confucius built his principles on an ancient religious foundation to establish the social values and ideals of traditional Chinese society — not as a separate church, but established within social, familial, school, and state institutions so that parents, teachers, and even bureaucratic officials served as its “priests.” This wove Confucianism into the Chinese social fabric to such an extent that Confucianism part of everyday life. Consciously or not, Confucius expanded the idea of religious ritual to comprise social rituals such as common courtesy and accepted standards of behavior — so-called social mores. These civilizing mores, he believed, would ultimately lead to well-governed states and peace between nations. 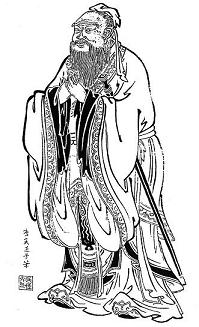 In systematizing the accumulated social wisdom and ideals of the ancients, Confucius referred to himself as a “transmitter” rather than a creator. “In me, knowledge is not innate,” he said. “I am one who loves antiquity and is earnest in the study of it.” Like the ancient philosophers who had come before him, Confucius realized that the only way to establish a harmonious society was to inculcate ethical conduct in individuals, and much of his philosophy was aimed at just that.

Social conditions continued to deteriorate after K’ung’s death, culminating in the violently chaotic era known as the Period of the Warring States (401-221). The social upheaval that was ripping up Chinese society during that time may have created precisely the fertile soil in which K’ung’s teachings began to bear fruit. What had been a kind of heroic approach to warfare ruled by chivalric codes known as li (“rites”), for instance, during this time became much more vicious and atrocity-laden, threatening the stability of the empire and the peace of mind of the populace.

Confucius taught the human Way as opposed to the cosmic or mystical Way of Lao-tzu, who was roughly his contemporary. (About 50 years his senior according to one historian’s estimate, Lao-tzu is said to have met Confucius once.) Proclaiming that one must follow the four cardinal virtues of Love, Righteousness, Propriety, and Wisdom in a social context of duties and obligations, Confucius voiced his highest principle in what is probably the earliest formulation of the Golden Rule: “Do not do unto others what you would not have them do unto you.” For Confucius, this applied especially to what he termed the Five Relationships (Wu-lun): between ruler and subject, husband and wife, father and son, elder and younger brothers, and older and younger friends. The Confucian equation called for the respect and obedience of one group (subjects, wives, sons, and younger brothers) in return for benevolence and support on the part of the other group (rulers, husbands, fathers, and elders). Although the male-dominated language may offend modern readers, his formula was radical for its day in that it at least called for a reciprocal kindness and benevolence on the part of the more socially empowered group. Over time, however, it became mired in an artificial construct of rituals, standards of conduct, and hierarchies of precedence.

Next ~ Confucian Texts and Key Principles »