Islam at a Glance 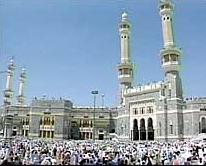 Islam is a great spiritual tradition that, in the wake of Sept. 11, has become enormously unpopular and suspect among some Westerners, particularly in the U.S. It’s a credit to America’s heritage of religious tolerance that, according to recent polls, the vast majority of Americans still view Islam favorably, despite its image as a religion at war with Christians and Jews. That image has very little to do with the theology or practices of Islam, and everything to do with political realities, such as the lack of democratic governments in the Middle East, some of which are nonetheless supported by the United States.

It may be more helpful for non-Muslims to view Islam as its followers themselves see it: as the third and final revelation in Western religion that began with Judaism and Christianity. Muslims do not regard these as three separate religions but as one continuously unfolding historical tradition that is rooted in the Middle East, although there are now many more Muslims in other parts of the world, notably Indonesia and South Asia. The God of Islam, called Allah, is absolutely identical with the God of Abraham. He announces Himself in the Muslim holy book called the Quran as the same God who sent His message to the world through Abraham, Moses, and Jesus. The Quran frequently repeats (with God speaking in the royal plural) the concept of a continuum of revelation:

We have sent revelations to you as We sent
revelations to Noah and the prophets
(who came) after him;
and we sent revelations to Abraham
and Ishmael and Isaac and Jacob, and their offspring . . .
and to Jonah and Aaron and Solomon,
and to David we gave the Book of Psalms. . . .
Then in their train we sent Our apostles,
and succeeding them Jesus, son of Mary,
and gave him the Gospel, and put into the hearts
of his followers compassion and kindness.*
(Quran, 4:163-4, 57:27)

The Prophet Muhammad, who received the Quran as revelation from God through the Angel Gabriel, saw himself in the tradition of the Hebrew prophets. His revelation included elements that would sound familiar to most Christians: the Last Day, the Resurrection of the Dead, Final Judgment, the rewards of Paradise and the punishments of Hell, and the Second Coming of Jesus. Muhammad himself proclaimed that the Virgin Mary, the Mother of Jesus, is “the highest of the women of the people of Paradise,” and the Quran affirms the doctrine of the Virgin Birth of Jesus.

Muslims believe that God revealed the same message anew to successive prophets with the aim of reforming a stumbling humanity, but that each message was gradually distorted by the people who received it.

There are over a billion Muslims in the world today, including about seven million in the U.S., making it the second most populous religion on earth after Christianity. According to some estimates, Islam is the fastest-growing religion in the world. Although it encompasses most of the Middle East, that region accounts for only about 20 percent of the world’s Muslims. The rest are spread throughout Africa and Western Asia, especially Indonesia (except for the islands of Bali and Lompok, which are largely Hindu), Pakistan, Malaysia, and parts of India.

Next ~ The World Where Islam Was Born »