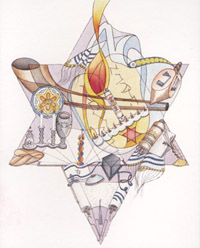 The tradition of Judaism links the ancient and modern worlds in the West in much the same way that the Hindu tradition does in the East. It forms part of the triad of Abrahamic religions, along with Christianity and Islam, that have defined Western monotheism. For if any single concept characterizes religion in the West, it would have to be the belief in one God, omnipotent and omnipresent. “The Lord is one,” says a part of the Hebrew Bible that reaches back over 3,000 years. And nearly 1700 years later, the Islamic Quran declared, “There is no god but God.”

Monotheism had made other appearances before Moses codified it, most notably in Egypt, where Moses was born, but the Jewish tradition is the one responsible for establishing the concept firmly and irrevocably in Western culture. It’s clear from the Hebrew Bible that monotheism developed slowly, from a belief that the tribal God of the Hebrews named Yahweh was simply the most important and powerful of many gods. The many early references to God in the plural make that obvious. Still, the God of Israel is a personal God, and an ethically demanding one, and this combination of characteristics was unique for its time. Unlike most other deities of comparable antiquity, the God of Judaism is never described or given any visual image, nor, in the strict sense, is God’s name even to be spoken aloud. Yet this God interacts directly and decisively with humanity.

The Hebrew God is a sky god meant to supplant the many manifestations of the more ancient Goddess in the Mediterranean region. This male identity was passed on to Christianity and Islam, separating these three traditions from the rest of the world’s conception of the Absolute in a significant way. The idolatry that the monotheistic traditions so violently opposed was in large part the much older, female-centered worship of the Goddess.

The Jewish people themselves have wandered the earth for nearly 2000 years, from the destruction of the Temple of Jerusalem in the year 70 until the founding of the State of Isreael in 1948. Their numbers are relatively small today — only about 15 million — but the Hebrew conception of God is at the core of Christianity and Islam, indelibly coloring these two religions that between them account for nearly half the earth’s population.

Judaism may have evolved significantly from the early era of animal sacrifices, but there are ways in which it hasn’t changed from its very earliest roots. Every week in synagogues around the world, observant Jews still proclaim one of the oldest passages in the Bible, “Hear, O Israel: The Lord our God, the Lord is one.” (Deuteronomy 6:4)

Next ~ The God of History »

The God of History
The Covenant
Moses
Tetragrammaton
Kings and Prophets
The Babylonian Captivity
The Torah
The Hebrew Bible
The Talmud
Jewish Mysticism: The Kabbalah
Hasidism
The Four Branches of Modern Judaism