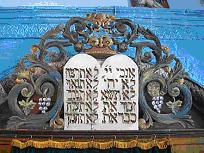 The Ten Commandments At Karo Synagogue In Safed

Early in the Bible God is referred to as El, a common Semitic name for God, and the plural Elohim. Elsewhere El Elion, “Most High God,” seems to confirm the existence of a pantheon of lesser gods. But by far the most common name used is Yahveh, a simplified pronunciation of the Hebrew consonants Yod Hay Vav Hay (YHVH), which are not to be spoken by pious Jews except in the sanctuary. They may substitute Adonai, “My Lord,” or Elohim. The four consonants are also known by the Greek term Tetragrammaton and the Hebrew Shem ha-Meforash (shortened to Hashem, “The Name,” and said in lieu of YHVH). A modern scholar, Merlin Stone, has pointed out the close relation of the name to the Sanskrit word yahveh, “everflowing,” which seems like a fair description of the fire and smoke that continually emit from Mt. Sinai when the Lord is present there. During the 16th century, the name Yahveh was distorted by Christian readers of the Bible into Jehovah. But even Yahveh is just an approximation of how the four sacred syllables are to be pronounced, which is the subject of much esoteric study and speculation.

Next ~ Kings and Prophets »