In the late 1940s, the world of biblical scholarship was handed a stunning surprise. A trove of previously unknown papyrus manuscripts discovered near Nag Hammadi in Upper Egypt, dating back to the earliest centuries of Christianity, contained a number of alternative gospels. Maybe the most surprising was the Gospel of Thomas, written early in the 2nd century in a form similar to the lost “sayings gospel” that the four evangelists drew upon. Some scholars believe that many of the texts may predate the four canonical gospels and express a set of beliefs known as Gnosticism. 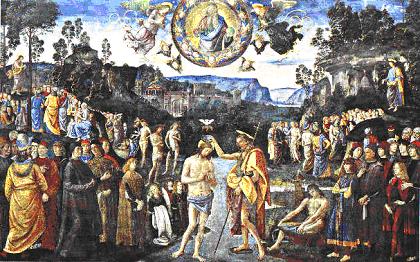 The Baptism of Christ.

Scholars aren’t certain whether Gnosticism developed out of Christianity or if the early Christians were reflecting Gnostic beliefs that were already in circulation. Part of the reason for this is that Gnostic teachings were secret and most were never committed to writing; what writings did exist were sought out and destroyed by the branch of the Christian church that became dominant. But the Nag Hammadi texts disclosed a combination of Asian mysticism, magic, astrology, and Jewish Kabbalah in a Christian setting. Gnostics divided the world into opposing forces of good and evil, and they believed they had access to secret wisdom (gnosis is Greek for “knowledge”). Gnostics believed the widespread myth of the Trickster, a human or animal who, like the serpent in Genesis, tricks humanity out of its rightful enjoyment of the world. The Trickster could also be a secondary god who creates the world, identified by some Gnostics with the Old Testament God. He is inferior to the supreme God, but the created world of matter, corrupted by the devil, bears his mark. Because many Gnostics saw matter as evil and spirit as good, they believed that sex and marriage were to be avoided.

Most of what the Gnostics practiced horrified the orthodox elements of the growing Christian church, including Eastern meditation, secret rituals, belief in reincarnation, and equal treatment of women. In the Gospel of Mary (found before Nag Hammadi), Mary Magdalene recounts seeing Jesus in a vision after his death. The disciple, including Peter and Andrew, immediately ridicule her, no doubt indicative of the orthodx position to both Gnostics and women claiming spiritual authority. By the 6th century, Church councils had denounced Gnosticism as heresy, including reincarnation (2nd Council of Constantinople, 553), and most Gnostic writings disappeared until the Nag Hammadi library was discovered in 1945.

Next ~ Borrowings: The Mithras Connection »