The Life of Jesus

The Four Gospels differ from each other in some important details, but the basic narrative is familiar by now. During the Roman occupation of Judea, Mary, a virgin betrothed to the carpenter Joseph (both living in Nazareth, a town of about 1,600 in the northern province of Galilee), is pregnant, even though she has not had intercourse with Joseph. Joseph is understandably upset at this, but angels appear separately to Mary and Joseph explaining that the child that has been mysteriously conceived is “of the Holy Spirit,” and will “save the people from their sins.” Joseph agrees to take Mary into his household and not to sleep with her until the child, to be named Jesus, is born. 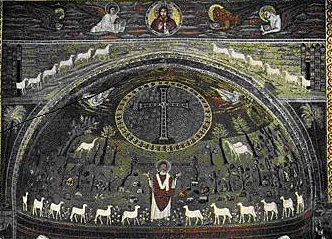 The twelve lambs, six on each side of Christ, represent the 12 apostles

She delivers her child in impoverished circumstances in Bethlehem, and by the time he is 12 he is discovered by his parents talking with the learned teachers in the Temple of Jerusalem. When we next encounter Jesus at about age 30, he is being baptized in the River Jordan. John the Baptist belonged to a sect of Morning Bathers, one of several Jewish communities that offered ritual ablution as a form of forgiveness for sins in anticipation of the end of time. “Repent for the kingdom of heaven is at hand,” John preached, possibly reflecting an Essene influence. He was later executed by Herod Antipas.

The baptism triggers a powerful experience in Jesus, as he sees “the Spirit descending on him like a dove” and hears a heavenly voice proclaiming, “This is my beloved son.” Jesus then goes into the desert to fast for 40 days, and is “tempted by the devil.” He refuses offers of material gain in exchange for using his newfound spiritual powers for self-aggrandizement. Leaving the wilderness, Jesus returns to Galilee to begin his ministry. Reaching out to people on the lowest rungs of the social order, he calls four local fishermen to join him as he he goes to the town of Capernaum by the Sea of Galilee to heal and teach. He is immediately perceived as someone who speaks from his own spiritual experience, not merely interpreting canon law, and he heals maladies ranging from demonic possession to blindness and paralysis, attracting even more followers. He selects 12 men to be his apostles, although he clearly has a close relationship with Mary Magdalene, and some of his most notable teachings and healings involve women.

Using parables, metaphorical stories that appeal to the peasants, farmers, and artisans who make up most of his following, Jesus teaches in a way that is both simple and profound. Like Zen stories, his descriptions drawn from daily life are striking and often confound his listeners’ expectations, as when he says, “Do not resist one who is evil. But if anyone strikes you on the right cheek, turn to him the other also; and if anyone would sue you and take your coat, let him have your cloak as well” (Matt. 5:39-40). He emphasizes love and forgiveness in countless sayings, and elevates the lowly over the rich and powerful.

Yet after only three years of public life, Jesus is arrested and handed over to the Roman authorities. After a brief trial, he is sentenced to death by crucifixion, an especially painful and brutal form of Roman execution used against criminals and rebellious Jews. After dying on the cross, his body is taken down and laid in a sepulcher. But when some of his women followers, including his mother and Mary Magdalene, arrive at the tomb to anoint his body, they are informed by a “young man in a white robe” that Jesus has “risen.” Known as the Resurrection, this event is the cornerstone of Christian dogma, proving that Jesus was divine. In some gospel accounts, Jesus later appears to his disciples in human form, preaches briefly, and after 40 days on earth ascends bodily into heaven.

As Jesus is reaching out to the common folk, he also attracts the attention of the Jewish scribes, or canon-lawyers, and the Pharisees and Saducees, who accuse him of consorting with “tax-collectors and sinners.” For Jesus to teach and eat with the Jewish tax-collectors — men who collaborate with the Romans and pay a fee for the right to extort as much tax money as they can from fellow Jews — outrages the religious establishment. But the occupying Romans hold the ultimate power, and they perceive Jesus as an even more dangerous threat to foment rebellion among the peasantry.

Next ~ Christian Scripture: The Gospel Truth »